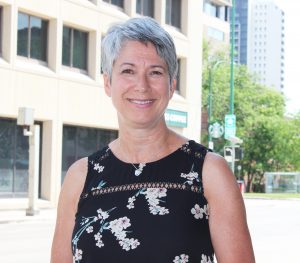 Wendy Schettler – CEO of the Alzheimer Society of Manitoba.

There are multiple ways to build community.

That’s according to the Alzheimer Society of Manitoba’s CEO Wendy Schettler, who was talking to The Lance recently on the eve of the provincial government’s third phase of restoring services safely in light of the COVID-19 pandemic.

Like many organizations in the last three months, the Alzheimer Society has had to adapt and pivot, and now one of the key things is to reimagine services while ensuring all of the individuals and families it helps continue to receive support.

Schettler said Minds in Motion, one of the society’s popular face-to-face programs, is an example of how programming has adapted in recent times, and the society currently offers different exercise and sing along sessions on Facebook Live, as well as numerous support groups on Zoom.

“As time has moved on, online programming has become an important part of things. Part of it has been figuring out the technology and logistics, so we’re still able to reach out and touch base with families, especially as more people may have been feeling isolated in the last few months. What’s front and centre for us is that people don’t feel abandoned or alone. It’s been all hands on deck for us,” she said.

And with restrictions around public gatherings beginning to loosen, Schettler — who lives in Norwood Flats — said organizers are in the process of thinking creatively about how to now hold in-person events, such as support groups.

“We’re figuring out how to meet socially, without risking anyone’s safety,” Schettler said. “In talking with folks that have early symptoms, lots of them are telling us they miss their group.”

As well, Schettler’s team are also brainstorming regarding the society’s annual Care4u Conference, which is held in October.

“Right now, we’re reimagining how to do that and exploring and figuring out ways to do it,” Schettler said.

“It’s all about building a sense of community, and there are multiple ways we can do that.”

Schettler is also grateful for the support of everyone that was involved with the recent IG Wealth Management Walk For Alzheimer’s Online event that was held on May 31.