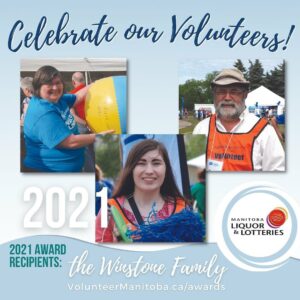 Congratulations to Arla, Reed and Arden Winstone for being this year’s recipients of the Manitoba Liquor & Lotteries Family Award in Volunteer Manitoba’s 38th Volunteer Awards! They have volunteered with the Alzheimer Society of Manitoba since 1992 and have helped us tremendously in a variety of our yearly events.

“Today, we are starting with The Winstone Family, who are being recognized with the Manitoba Liquor & Lotteries Family Award for their volunteer work supporting the Alzheimer Society of Manitoba since 1992!
Reed, Arla and Arden Winstone have raised thousands of dollars and donated countless hours to supporting programs and services for those living with dementia.
Additionally, each member has donated time in a handful of roles like administration, event organization and preparation, and facilitating the Minds in Motion Program.
The family’s involvement in uplifting Manitoba’s Alzheimer’s community stemmed from both Reed and Arla’s parents living with dementia, where they experienced the first-hand challenges other families face.
Their efforts and commitment to the Alzheimer’s community came from their personal experience with dementia and passion to help others, which was also celebrated during National Volunteer Week with the Alzheimer Society of Manitoba!