The people of Austin, Manitoba, and a young woman named Stéphanie Demers, who lives in Winnipeg, have something in common: they have played a role in turning their neighbourhoods into caring communities through their compassionate action towards someone with dementia. 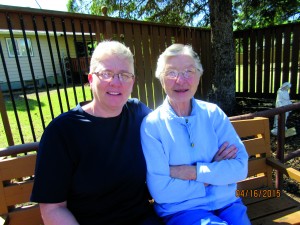 When Colleen Leslie’s mother, Hazel Lowe, began showing signs of dementia, Colleen worried about how she would care for her. Colleen helps run the family farm near Austin, Manitoba, and has a part-time job half an hour away. She has five children and nine grandchildren to think about, too.

Hazel, a former choir leader and school bus driver, had moved from her farm into a seniors’ lodge in Austin. There, her mother was around people who knew her. What Colleen didn’t know was just how much the community of 400 would care about – and care for – Hazel when Colleen couldn’t be there.

Hazel’s neighbours in her building were one piece of the support system that developed. Hazel loved to go for walks, but a nearby railway mainline and the Trans-Canada Highway posed a risk to her. It wasn’t long before the whole town would be on alert if they saw Hazel out walking. Someone would always be there to guide her home if necessary.

“Everyone always watched and made sure she was safe,” says Colleen.

When it was discovered that her mom was making daily withdrawals from the local credit union and giving the cash away, staff promised Colleen not to give Hazel more than a few dollars each time she came in. “They told her they didn’t want to give her too much money or she wouldn’t come back to visit them as often,” Colleen chuckles.

The grocer and hairdresser also agreed to run up a tab that Colleen would pay, rather than expecting Hazel to remember to pay them.

In December 2014, Hazel moved to a care home in McGregor, where staff now care for her. Colleen appreciates that, but is also very grateful to the caring people of Austin. “I know she wouldn’t have managed as long as she did if everyone hadn’t been watching out for her.” 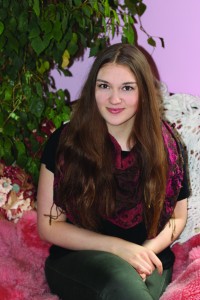 Stéphanie Demers is a lot like the people of Austin. The 18-year-old Winnipeg nursing student was in the right place at the right time and didn’t hesitate to help a person with dementia.

It was about 0⁰ C on a December night last year. Stéphanie was driving to a friend’s house when she saw an elderly man walking on the busy road. She pulled over, put on her flashers, and rolled down her window to speak to him. “He wasn’t wearing a coat and was clearly confused,” she says. Still, she was cautious. Was he only pretending and did he mean her harm?

She decided that he was not a risk and urged him into the car, where it was warm. She called police and while they waited, she chatted with the man, who said he was born in 1923 but also said he lived with his mother. When the police arrived, they were compassionate and seemed to know the man. They told Stéphanie they would take him home. Stéphanie is left wondering about his story. “I worry about him. Who’s caring for him now?”

She’s glad she stopped to help the elderly gentleman and says that, although a person should always assess their own safety first, she hopes anyone would have done what she did.

Wendy Schettler, CEO of the Alzheimer Society of Manitoba, praises Stéphanie and the people of Austin. “In order for people with dementia to better live in the community, we all need to get involved…It takes a thoughtful, compassionate community to care for our most vulnerable,” she says.