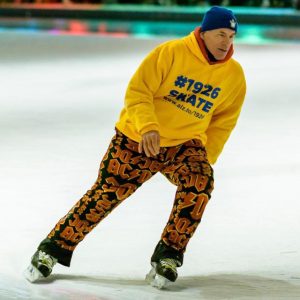 For the past seven years Steve McNeil has skated for 19 hours and 26 minutes at Toronto’s city hall rink to raise awareness and funds for Alzheimer’s disease. This year he will skate his marathon in all seven Canadian National Hockey League cities, including Winnipeg.

This is to raise awareness for Alzheimer’s disease as a tribute to his mother, Eunice, who was born on December 15, 1926, and lived 15 years with Alzheimer’s disease before it claimed her life. Steve is asking those who are fundraising to donate $19.26 or more to the Alzheimer Society of Manitoba

McNeil invites everyone to come and skate with him or stop by on Thursday at 12.26 p.m., which will be the finale of his seven-city skate.